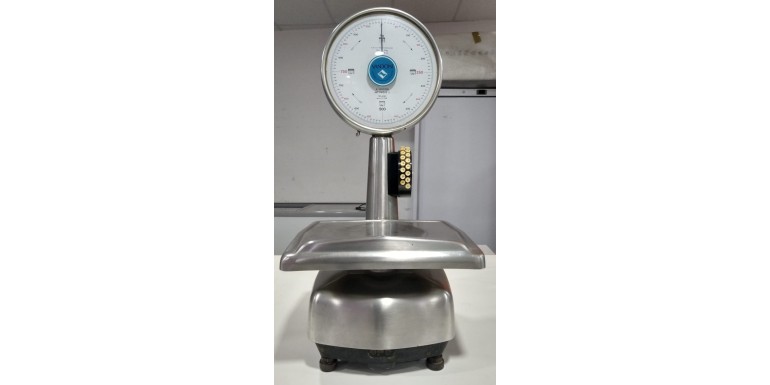 The scale is divided into head, column and base.

CLICK ON THE CODES TO VIEW THE SPARE PARTS

In the head of the automatic scale, the reading takes place by means of a pointer AGWSLAN2EUR0018 . The head structure consists of levers and mechanical systems. The various systems include: flexible belt operation AGWSNAS2MAV0160 which act on masses that act as a counterweight to the weight placed on the scale plate or of mechanical parallelogram systems that determine the weight through pendular masses  AGWSBKLBIL0047 but connected to a system of geometric variation.

The various movements are concentrated on a rack AGWSCRE2BIZ0004 in turn in contact with a pinion or toothed axis  AGWSPIG2EUR0021 which operates on two bearings or triblometers AGWSCUS2MAV0031 on which the hands are assembled.

The reading is in an analog system through dials and sub-dials both positioned on the head (see photo) where sensitivity (division) and total range are impressed.

The transmission between the head and the plate takes place via a column inside which a tie rod and a damper are positioned ALFBIL0009 which contains white mineral oil AGWSOIL0120 (in the semi-automatic scales equipped with a handle for weight variation and a triangular head, the damper can be air-operated with a graphite piston). The base is made up of knife levers AGWSCOL2EUR0001 and stones on which a cross rests where the plate is fixed AGWSBIL (fruit bowl, top for meats, cold cuts and cheeses and fish channel plate).